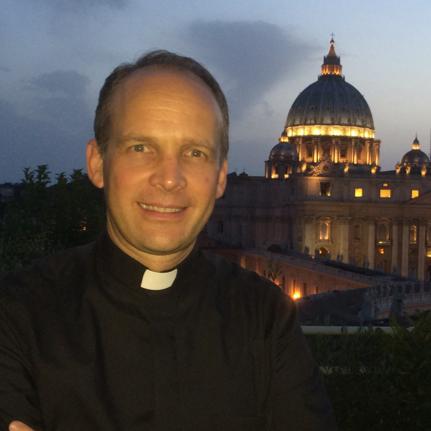 Fr. Borgman is a Catholic Priest working in the diocese of Orange in California. He was born in Fort Collins Colorado and grew up in a Protestant missionary family in Ivory Coast, West Africa, along with his brother and twin sister. At the age of 17, he moved to California and attended Vanguard University in 1993 completing a Bachelors Degree in Communications with an emphasis in Television and Film. Following graduation, he worked in the Film Industry for 10 years. Following his parent’s entry into the Catholic Church, he went through the RCIA program at St. Joachim’s in Costa Mesa. He was confirmed into the Catholic Church on September 21, 2001, in Toulon (France) by Bishop Dominique Rey. Being drawn ever closer to Christ and at the invitation of Bishop Rey, he entered the seminary in Toulon. The following year he went to Rome to continue his studies in philosophy and theology at the University of the Holy Cross (Sancta Croce) while attending seminary at the Collegio Internazional Sedes Sapientiae. He was ordained into the Priesthood on June 27th, 2010. Subsequently he would complete an Ecclesiastical Licentiate and Doctoral degree in Canon Law. Having worked for the Holy See as Coordinating Secretary at the Pontifical Academy for Life, Father Borgman also served in the Vatican’s Office of Liturgical Celebrations as an Assistant Master of Ceremonies to the Holy Father. In his free time, he has enjoyed preaching retreats and serving as chaplain to Saint Mother Theresa of Calcutta’s Missionaries of Charity sisters as well as for American students on their Rome campus. Living in Rome for thirteen years was a wonderful experience of living in proximity to the Holy Father, along with the historical significance of the city and the lives of the saints who testify to God’s love and how ordinary people can obtain holiness. Fr. Borgman has been appointed as the Judicial Vicar for Canonical Services at the Tribunal of the Diocese of Orange.